Just this year, I started hitting the gym on the regular.

I’ve been breaking a sweat off and on my whole life, but until now, it’s been an all or nothing approach. I’m thankful to say that year 25 was when it clicked: Exercise isn’t another task; it’s a privilege.

And it’s true what they say – a body in motion stays in motion. After a day at a desk, my muscles get antsy. Moving just feels right.

I started strong on the elliptical and weights, but soon realized I could do more. I was averaging hour-long cardio sessions, which wasn’t really necessary daily. It was time to do more with less time.

Running was the answer.

Kelby and I went for our first “date night” run in early March. The former football player in him showed off, doing a few extra laps, while I strictly followed the couch to 5k program. Slowly but surely, I kept putting one foot in front of the other, eventually crossing the finish line at my first 5k in June. 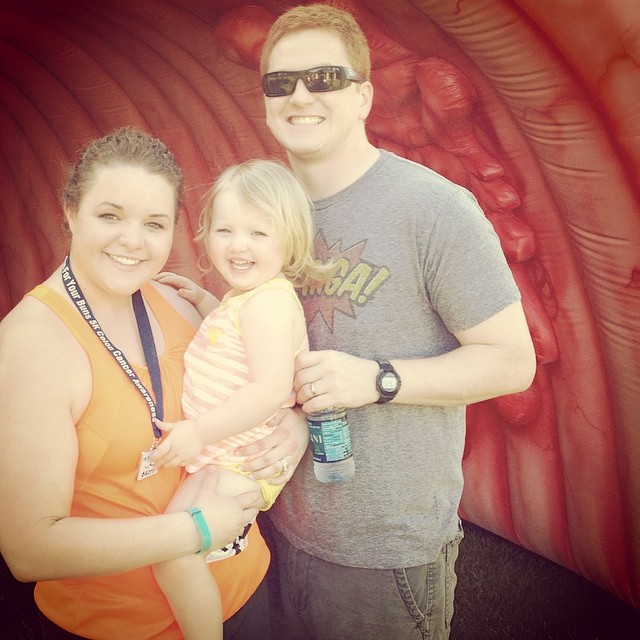 While I didn’t run a solid 30 minutes, I can now easily run a mile without thinking I’ll keel over. For me, that’s huge. (I was the child walking the mile during physical fitness tests in grade school.)

The 5k was a couple of weeks ago. I had a decision to make –  I could say it was a good run and be done, or I could keep going.

I chose to keep going.

Will I still take walking breaks? Likely. Will I increase my mileage? Hopefully. Will I push myself a little more each day? Definitely.

Running helps me think through and process the day. It’s time to recharge and refuel my creativity. I run for myself, and I run to be a better wife and mom.

Annistyn is old enough to get it. She knows when, “Mom going for a run again?” She races me at the playground and says she’s fast, like mommy. (Shhh! Don’t tell her how slow I really am.)

Seeing how proud she is motivates me to keep going. Strong and determined, she’s watching every move.

Someone who runs, or a real runner?

When I first started writing as part of my career, it felt a little funny to call myself a writer. I wasn’t publishing novels. After some time, I decided it was up to me. While just a title, it meant something. Saying I was a writer changed my mindset.

Today, I’m not just someone who runs. I’m declaring myself a runner. While I’ve got plenty of room to grow, I have a lifetime to improve.